Are you confused by politics? Unsure about all those political terms you hear bandied about constantly – Left, Right, Conservative, Liberal, Socialist, Communist, Republican, Democrat? What do they all mean, and what’s the difference?

I must confess, for a good part of my life, I turned a mostly-deaf ear to politics. I had no clue which political party was on the Left, and which was on the Right. And I didn’t know what the difference was. Do you? I just listened to all the candidates, and then voted for the one whose views sounded the most like mine, without being concerned about which party he/she belonged to.

Then we moved to a state that required me to register as one political party or the other in order to vote (that determined which party’s primary I was allowed to vote in). At that point, I had to learn which party’s politics were more closely aligned with my own, just so I could register to vote!

So if you’re clueless or confused about politics, this explanation should clear up some things for you. Now you don’t have to be confused any more.

I don’t know about you, but I read a heck of a lot faster than people talk on video. So it drives me nuts to find videos everywhere, with no alternative way to get the info they contain. So, if you prefer to read instead of watching a video (or if you’re at work and might get in trouble for watching a video), we’ve transcribed the video for you below [with a little commentary of our own]:

[Some claim those terms originated with Ecclesiastes 10:2, which in some translations, reads:

Convenient for the Right, but that verse was not referring to politics!]

In modern times, we talk about a political spectrum. Think of it as a horizontal line. Mark the center, and then you have a Left, and a Right. Just understand that there isn’t one single political spectrum that everyone agrees on.

Hat tip to Woody of woody.typepad.com for this illustration.

Also, different countries have different political parties. In U.S. politics, for instance, we have, starting from the Left: Socialists > Democrats > Liberals > Republicans > Conservatives > and a Tea Party.  [Not sure I agree with that order. See? Just illustrates her point.]

In the European Union, again starting from the Left, there are: Communists > Socialists > Green Party > Christian Democrats > Conservatives > and Right-Wing Extremists. [Wait, what about Left-Wing Extremists? Is their bias showing?]

You see, you can come up with a fairly accurate political spectrum if you base it on just one issue. For example, if we had individual freedom on the right, then on the left, we would have complete government control.

If we had private property rights on the right, then we would have complete government ownership and community property on the left.

But if you did make a political spectrum based on just one issue, then it would give you an accurate look at where the various political parties fall in terms of that one issue.User Manuals

To get into this a little more deeply, if we put political Left and Right into Wikipedia, we’d get something like this: 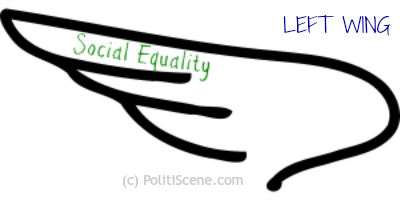 Left Wing describes an outlook or specific position that accepts and supports social equality, often in opposition to social hierarchy or social inequality.

And Right Wing describes an outlook or specific position that accepts and supports social hierarchy and social inequality.

So, let’s dive into that as an issue:

Why don’t we take a closer look?

One of the foundational principles in the Communist Manifesto is that social inequality is a bad thing, and Communism is the answer.

Wealth Inequality, or Re-Distribution of Wealth

In Marxist theory, the uneven distribution of wealth causes conflicts between the classes, and the solution is for the government to scoop up all the wealth and then distribute it evenly, or as needed. [And it seems that “as needed” and “evenly” are never the same!]

Realize that the main thrust of this movement was to incite social strife by pointing out these social wealth inequalities.

In contrast, the political Right is largely based on the Founding Fathers of the United States’ (and British philosopher John Locke’s) idea of “Natural Rights.” You know, those “inalienable rights to life, liberty, and property,” that by Natural Law we all have ownership of our work. And there will probably be some inequality among different people, because each person’s wealth is based upon his own personal production. It basically states that each person has ownership of that which they create, with the freedom to trade it and exchange it as they please. [Sounds fair and logical to me!]

But people don’t often talk about “wealth inequality.” Instead, you’ll hear them use terms like “social inequity,” or “social injustice.” And all of these terms are just ways of discussing wealth inequality. You hear about the gap between the rich and the poor. And basically all these terms are implying that it’s somehow unfair, or even an injustice, for one person to earn, or own, more than another.

[“Injustice” is a much more emotional word, so it is used to elicit an emotional response. No one wants “wealth re-distribution,” but people will readily agree that “social equality” or “income equality – equal pay for equal work – sounds like a good thing! It’s a semantics game.  It’s why laws are titled the way they are – for example, for how many people is the Affordable Care Act (Obamacare) actually affordable, if they’re not getting huge government subsidies?]

[And if you really want to talk about social injustice, is the “work” done by professional athletes and entertainers more valuable to the community/country than the work of the members of our military? You’d certainly think so by looking at the discrepancy in their pay! Seems to me that if we don’t have the military doing the work they do to keep us safe, then professional athletes and entertainers wouldn’t have the opportunity to do what they do. So why don’t we pay our military what their contribution is really worth?!]

So, on the Right, we have the idea that if someone works hard, they’re entitled to the benefits of their own labor.

And on the Left, we have Communism, which advocates the total disintegration of private property rights so that no “person” actually personally owns everything. All of the property is community-owned, or owned by the government.

[At least that’s the theory. However, a list of the cities with the most billionaires was just released. Guess which city just unseated New York to claim the most billionaires? Beijing! Wait, isn’t China a Communist country? So how can there be billionaires if the government owns everything?  Seems like some of our capitalist ideas are taking hold.

And that’s a perfect example of why Socialism and Communism have never been successful – the corruption at the top leads to widespread dissatisfaction among the “comrades,” who eventually realize that the corruption in the government is making a very elite few very wealthy on the backs of millions of hard-working peasants, who are government-rationed as to what they’re allowed to have, and they never have any prospect of improvement in their lot in life – they will always be peasants.  There is no such thing as “upward mobility” in Communism, unless you are in the upper echelons of the government.]

Karl Marx claimed that Socialism was a necessary step between Capitalism and Communism. So Socialism isn’t really an end in itself, it’s just a means to the end, which is a full Communist society. 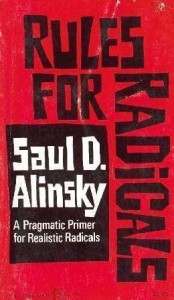 [This is why Socialist ideas being put forth by Obama, Hillary Clinton, and Bernie Sanders – free college, anyone? – are scaring the bejeezus out of people who understand that Socialism leads to Communism.  Both Obama and Hillary Clinton have been described as Communists in their idealogy, and we know that Obama grew up listening to Communist Frank Marshall Davis every week as they spent many hours together on a regular basis.  O and Hillary are both followers of the Communist Saul Alinsky.  If you want to scare your pants off, read Alinsky’s Rules for Radicals: A Practical Primer for Realistic Radicals

and recognize exactly what is going on in America today!  It will be quite an eye-opener.]

The basic idea in Socialism is a redistribution of wealth, taking money from the rich and giving it to the poor, just like Robin Hood [or “robbin’ the ‘hood”.  That’s what the Occupy folks are espousing].

Essentially the government takes money from the rich, or from the taxpayers, and redistributes it through social services provided to the poor. [Like welfare, for example. Since Communist/ Socialist/ Democrat Barack Obama became President, the welfare rolls in this country have grown by nearly 45%! Without a corresponding increase in growth of workers whose wages are taxed to provide those welfare dollars. Where is the money going to come from for all that extra “free stuff?”  Oh, that’s right – out of mine and your pockets!]

Marx had several criteria for a Communist society. One of them was a graduated income tax, meaning that the more income you made, the more taxes you would pay.  [Uh-oh!  Can you say “slippery slope?”]

To give you an example, here in the United States, seventy percent (70%) of taxes are paid by the top ten percent (10%) of the population. The lower forty percent (40%) income-wise, don’t pay ANY taxes at all. [Many of those in the upper strata of income pay little to no income tax, because they can afford lawyers and accountants to show them how to take maximum advantage of the tax laws.]

So, on the RIGHT, we have natural rights, private property, and a capitalist free market economy.

And on the LEFT, we have social rights, those which are sanctioned and dictated by the government, community property, and a government-planned economy, where the government controls the production and distribution of goods.”

So there you have it. Now, the next time you hear someone bashing “The Left” or “The Right,” at least you’ll understand what they’re talking about.

You might still have a glazed look in your eye, but it won’t be because you’re clueless! Thanks to PsycheTruth.com for that video explanation.